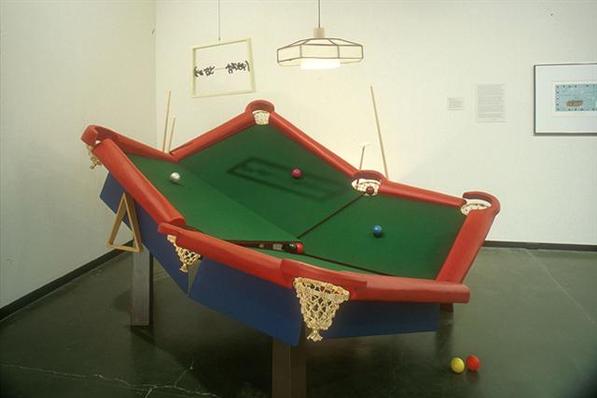 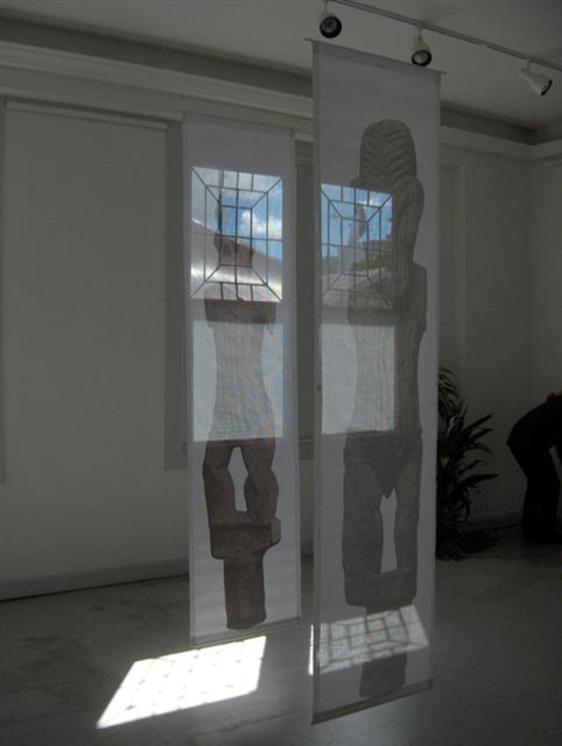 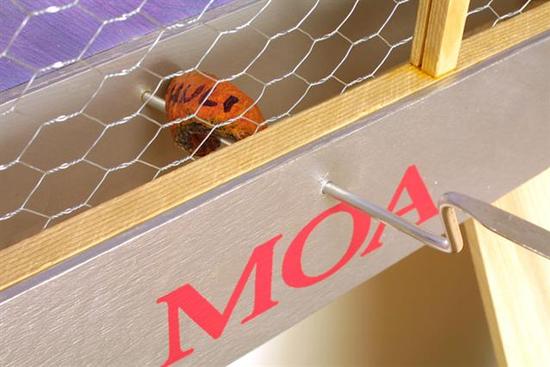 Chewing the Scenery refers to theatrical and film sets, and located in the University of Hawaii Art Gallery, it was intended to evoke the art notational systems and verbal play used in the surrounding art building employing two- and three-dimensional elements. It is about the acts of creation by an artist and the detective work of the viewer/participant discovering and understanding clues.

Chewing the Scenery specifically has reference to the paintings of di Chirico and other art historical elements, with the added playful element of dance notation. 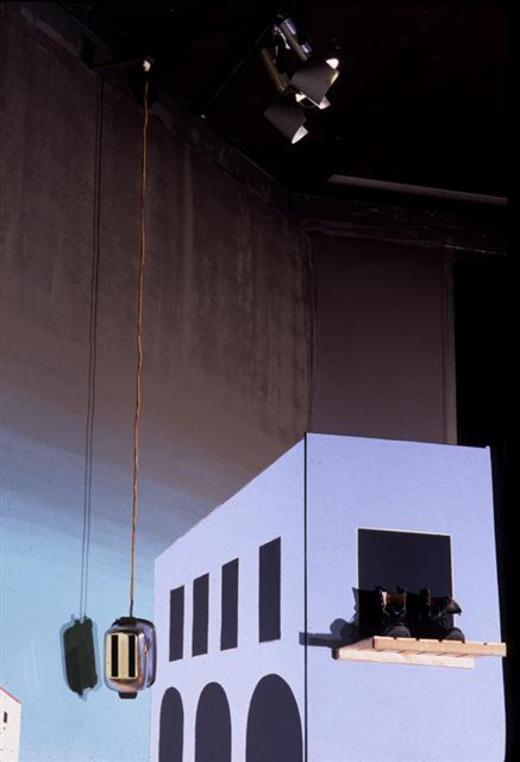 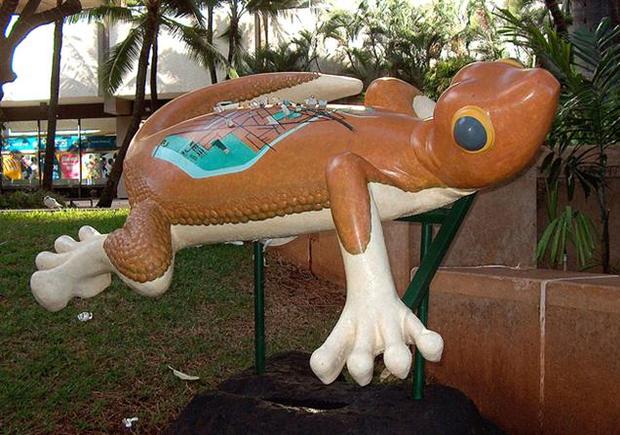 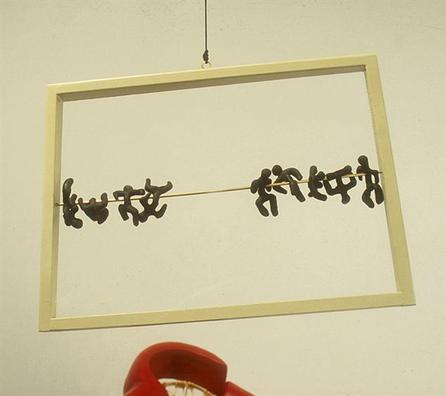 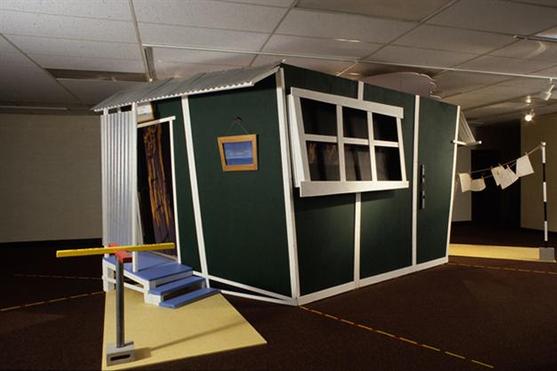 A View with a Room

A View with a Room, a mixed-media sculpture, exhibits the themes of contemporary Hawaiian culture, including attitudes toward land and space, as well as the theme of artmaking.

The primary structural element is a traditional Hawaii plantation house, rendered in a kapakahi (crooked, out of kilter) manner.

Colonialism and militarism try to control land and people and the way we view nature. The natural world–including animals and people–is divided, broken up and shattered, and the remnants are often measured, packaged and sold.

In this sculpture, inside and outside are reversed, as a comment on the domestication of nature. The inside is essentially a painted landscape with the human intrusions of military bunkers, an overreaching observational ladder to the sky, and devices and tools for viewing and depicting nature.

The outside includes other tools and devices for measuring and ordering space and making art. There are references to such activities as archaeology, cartography, history, architecture and other human impositions on the natural scene. 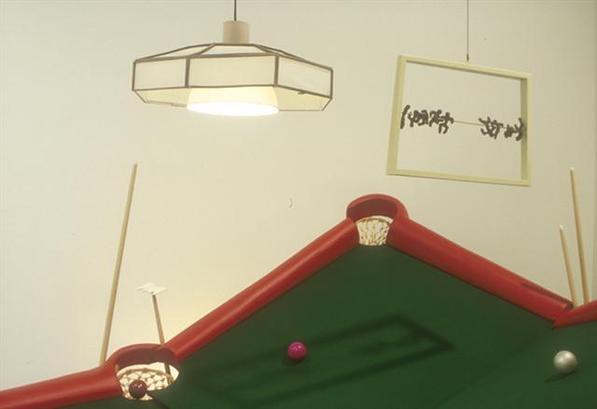 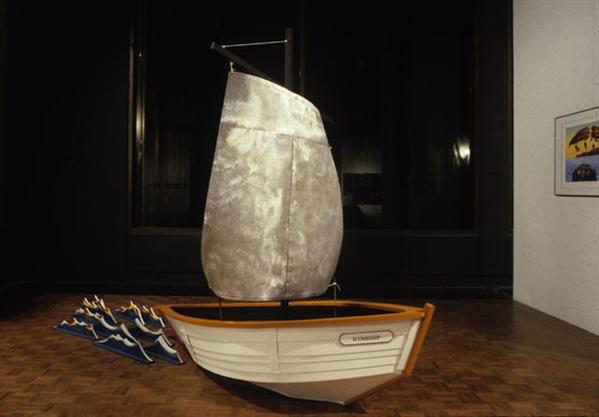 This installation celebrates Mö'ili'ili–it’s geology, history and significant community features. Mö'ili'ili’s geographical features provided its name. The curving contour of the lava flow rising above the open flat Waikiki plain suggests a mo'o, a mythological lizzard-like creature. Moʻo were often associated with springs and ponds, of which Mö'ili'ili had many. 'Ili'ili are small stones or pebbles, often rounded by water action, suggesting the pebble texture of a mo'o. This gecko sculpture has a map, on the top surface which captures the collective memory of the Mö'ili'ili community. The artwork incorporates the community features, the Quarry, the churches and temples, the parks and fields, the schools, theater and Humane Society, caverns, ponds and streams, from both today and from an earlier time. The blind fish in the caverns are seen below. 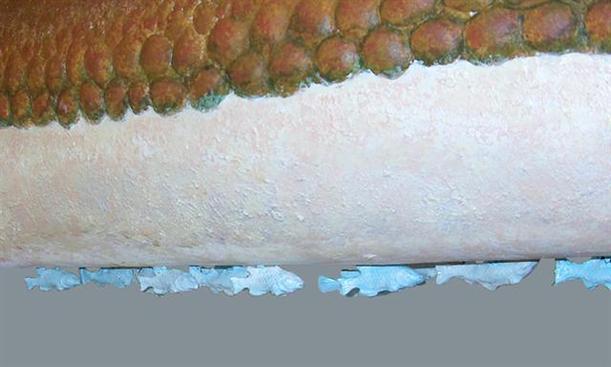 This installation is an objectified comment on theory, and a set of objects itself.

Cathedra–seat/locus of power within the western context, often associated with the royal or magisterial color of red/purple.


What do theorists theorize from?
from objects and, often, other theory.

There's much talk about the art object being less consequential, especially in an age when most everything is reproducible; many theorists are concerned with deconstructing art.

A chair on a wall, made of its component parts, is not functional.

The name spelled out by its components, is a self-referential sign of a chair.

Components function as examples of their deconstructed form and as a word.

Next to it while still a part of the artwork is a picture of the deconstructed chair, of chair-parts functioning as a word.

The word implies a further artistic function by myself of presenting the chair-parts and word in an art context, that is, both as an artwork, and an object in an art gallery.

Furthermore, the second picture/representation makes a third comment on the appropriation and use of signs, words, objects, reproducibilities in the context of presenting a layered artwork.

This artwork is about the dangers of exploiting and depleting resources of land and people without regard for their integrity. 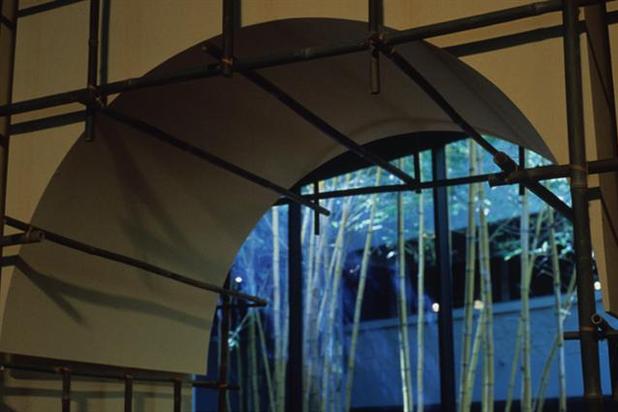 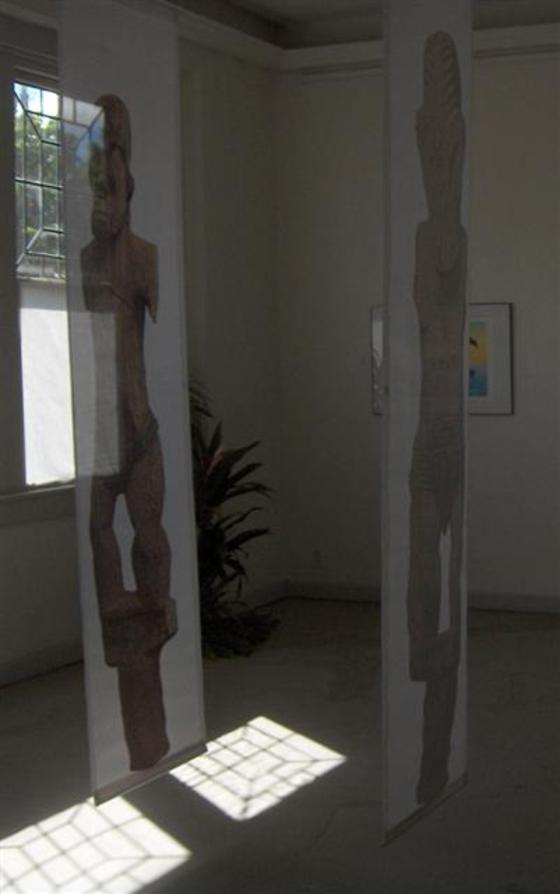 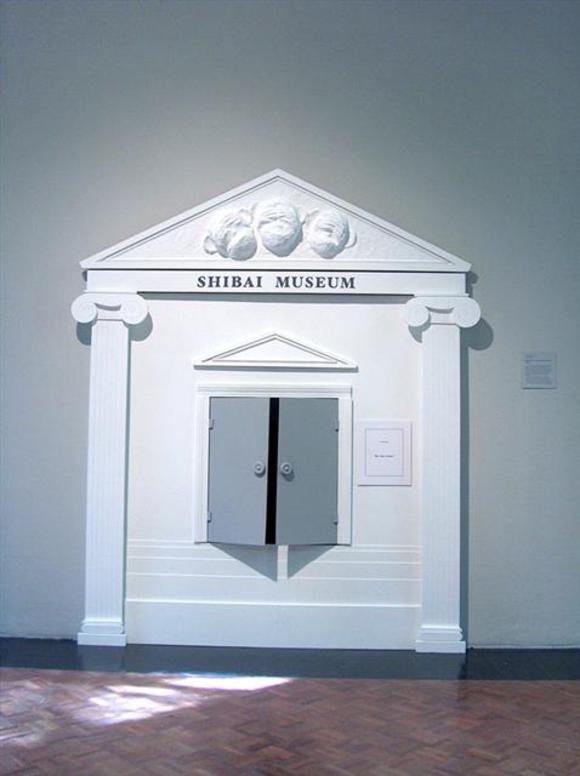 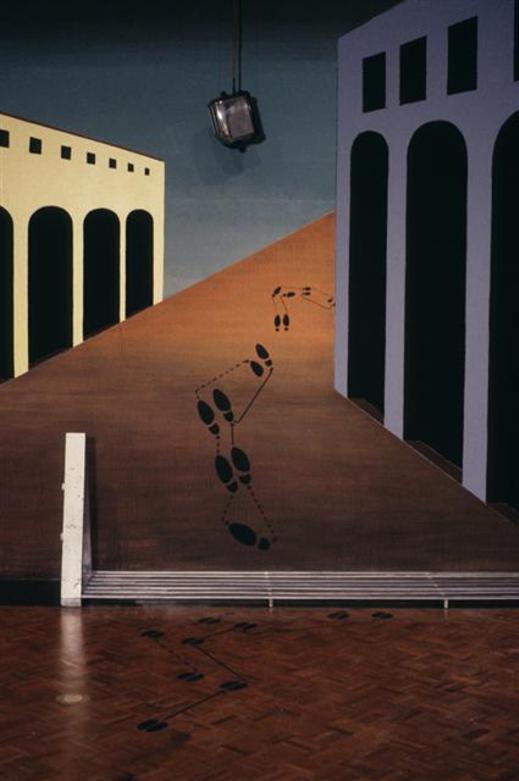 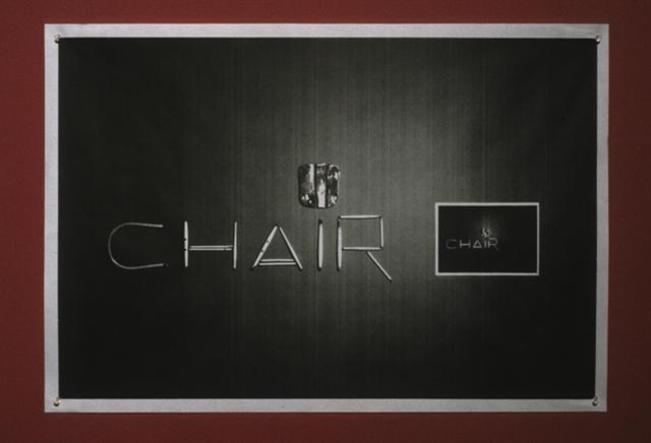 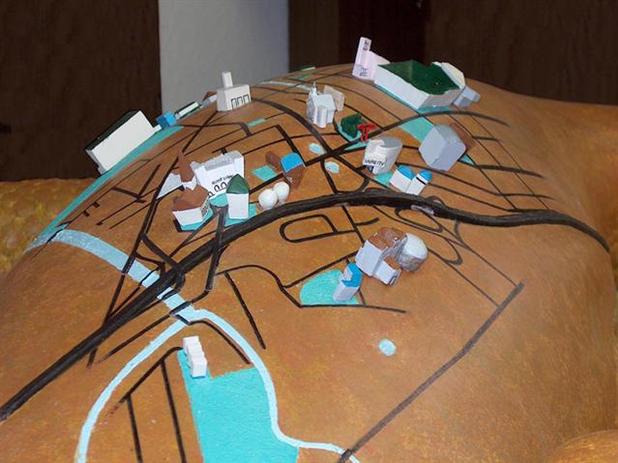 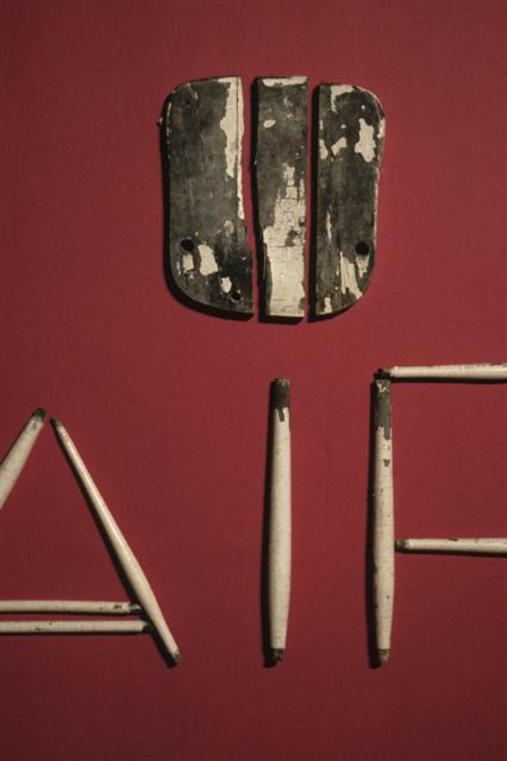 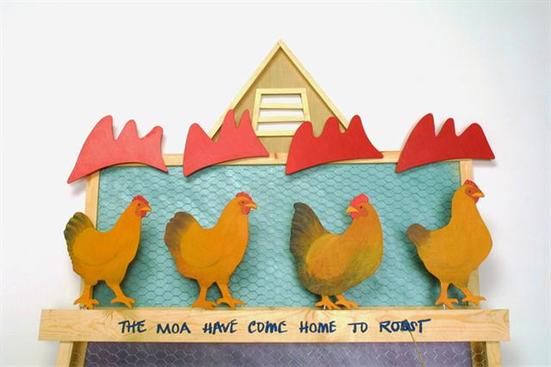 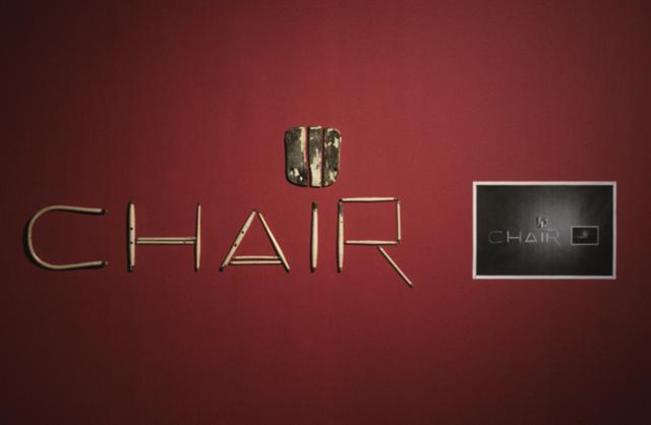 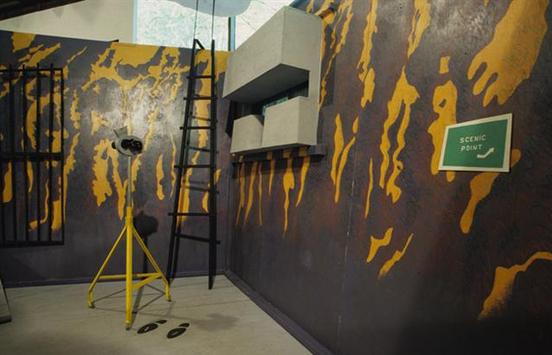 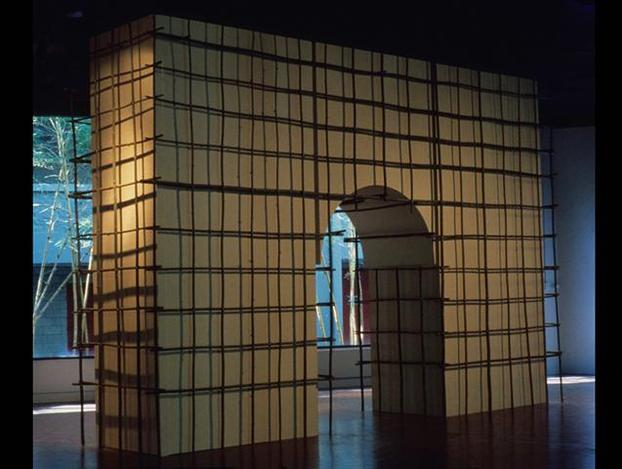 Malediction returns to speakers. Violence revisits its origins. Malcolm X inveighed against the climate of hate in America–this artwork brings it home to Hawai’i.

My installation sculpture Moah Moa (moa is the Hawaiian word for chicken and “moah” is local pidgin for “more”) intends to be a cultural and political statement about how hate-mongering and fear-mongering in the name of Hawaiian sovereignty rebounds against those with the harshest rhetoric. “The chickens have come home to roost” was spurred by the infamous statement by Malcolm X when President Kennedy was killed. Huli means to turn, to turn over like a cresting wave, or in common parlance, “huli huli chicken” means specially grilled/roasted chicken usually for fund-raisers.

In recent years many public artifacts have been removed from public view for reasons of cultural politics.  Part of my intention in this artwork is to help restore these important cultural artifacts to public appreciation. The ki'i are wood images of the first Hawai'i gods, Ku (male, sun rising, east) and Hina, (female, sun setting, west) that protect the fruitfulness of the earth and humankind. They were brought from Waipi'o Valley on the Big Island, transferred to the Saint Louis College campus on Nu'uanu Stream, and finally reside at the Bishop Museum. This ghost manifestation of ancient ki'i  surrounds us today.

My installations are created as vocative responses to things awry or out of kilter in the cultural world or the political world.

My interior installation sculptures invite human interaction through the act of discovery. Besides the kinesthetic act of walking around and through these installations and viewing them from many positions, these works also engage the viewer/participant aurally and tactily. 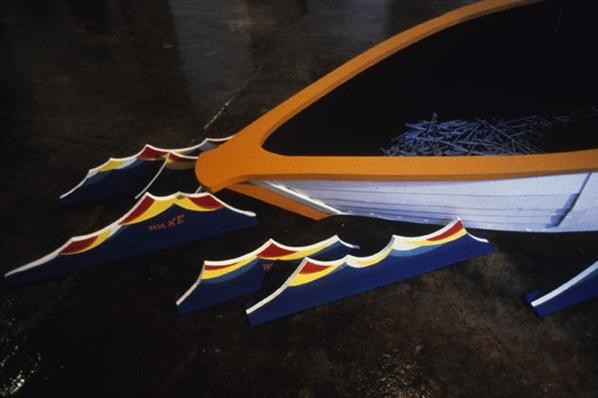 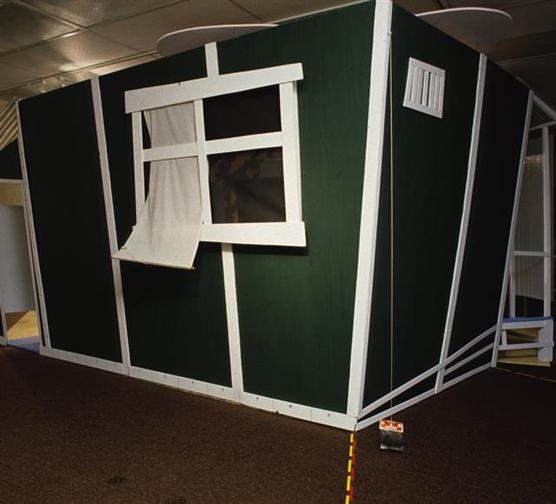 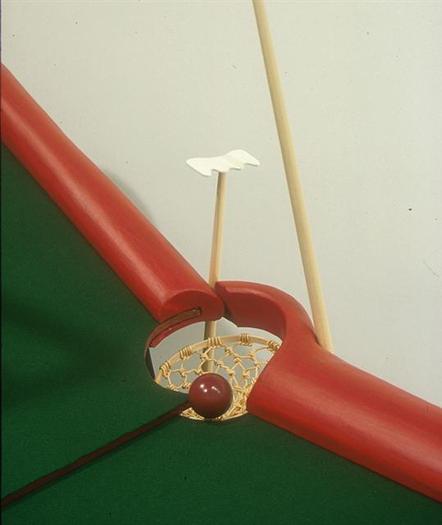 The ancient architectural structure–the arch–as for example in the Barrier Gate between Macau and China, is an entrance-way, which is also a barrier, hence creating insiders and outsiders, and essentially, is a passageway and transition. In China many structures have acquired a recent skin of bamboo scaffolding, whether temporary or permanent. A structure with such a bamboo façade is itself in transition. 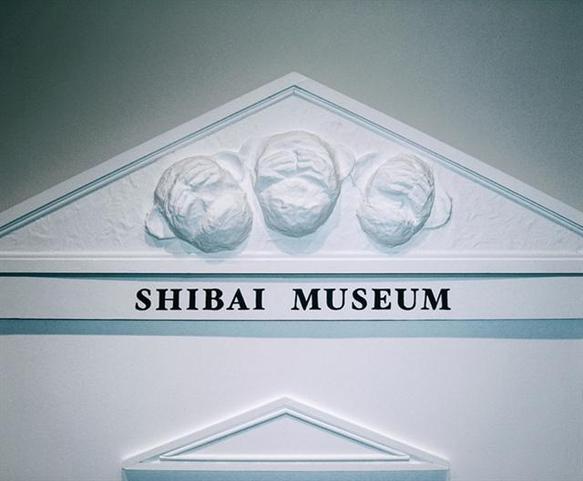 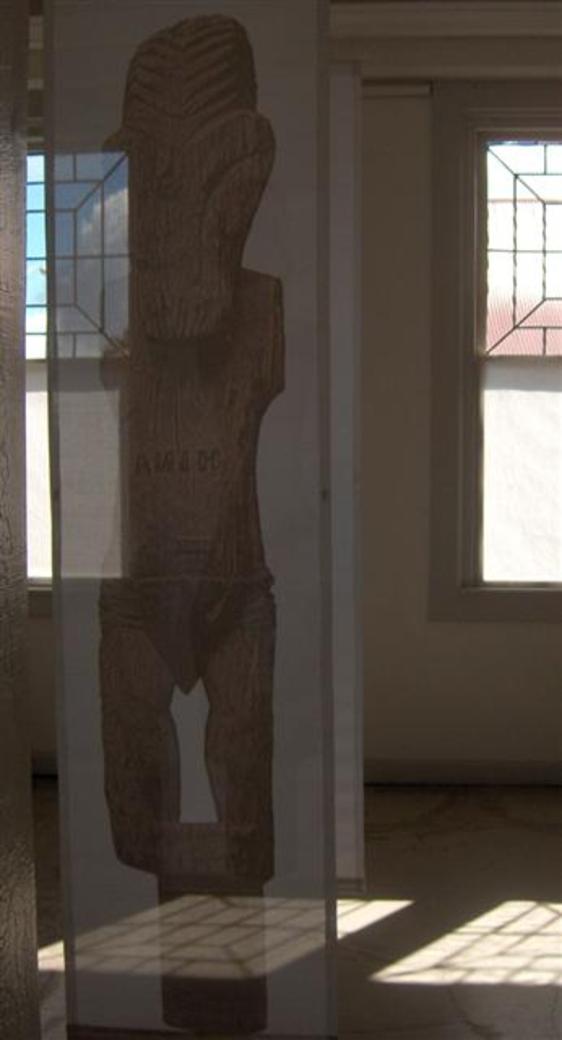 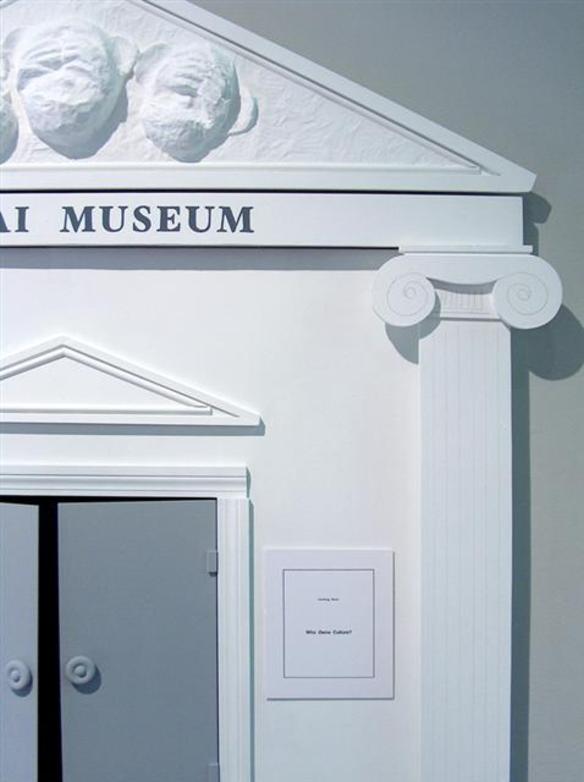 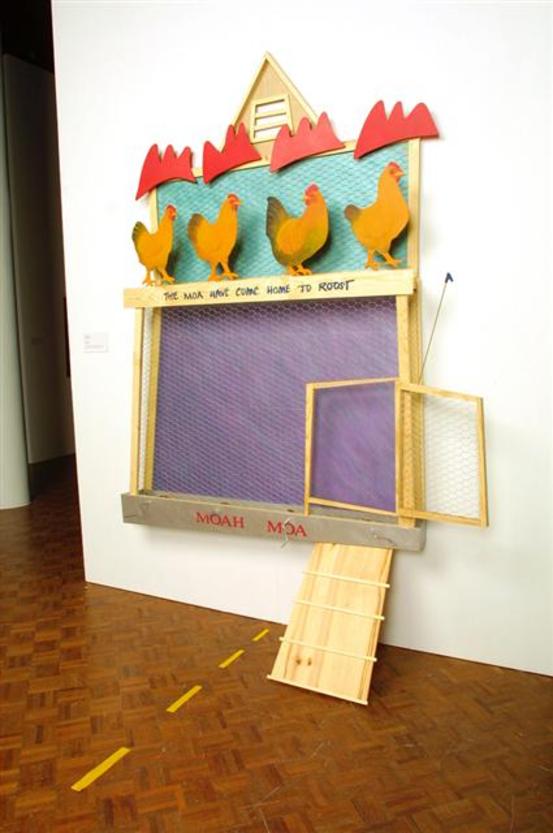 This vessel represents a powerful and mutually destructive conjunction of two cultures. As a practical matter the iron nails brought within the vessel were valuable and desirable material, objects of exchange to be given and taken. Both cultures, European and Hawaiian, have deeply held beliefs in their own ancestral lineage and cultural history. Often, such mutually misunderstood kinships can produce offspring sharing a mutual future, as well as the tragedy and violence left in their wake.

A museum of artworks, antiquities, artifacts whether historical or contemporary, is a repository of a culture’s self-definition and the culture’s relationship to the rest of the world. For any given exhibit questions arise as to who owns the culture exhibited. Such controversies are particularly acute when the artworks and artifacts have a spiritual or sacred nature. Ideally, a museum should be inclusive though some ideological would-be curators preach exclusivity.

In Japanese shibai means a drama or play, and in Hawaiʻi it connotes a falsity or fraudulence.