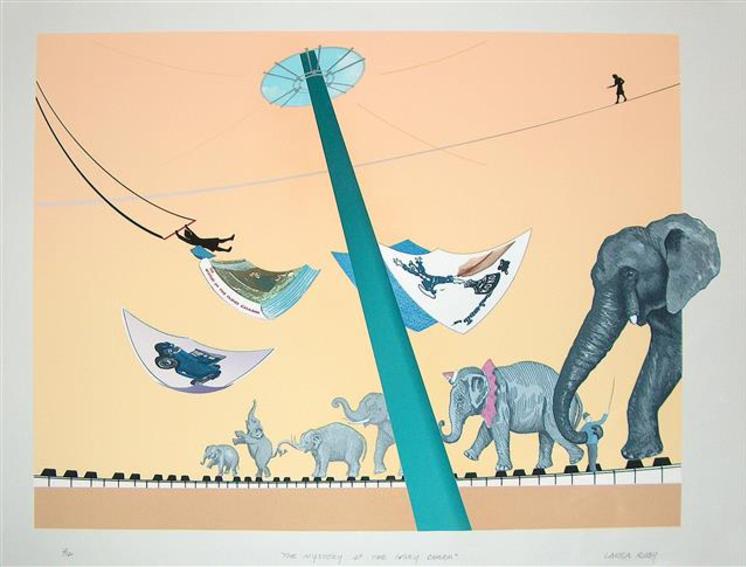 The Secret of the Old Clock

This print investigates time.  Various clues to how time is told are presented within the organizing composition of an American Craftsman mantelpiece, an architectural structure from early in the Twentieth Century.

Central in the print is Nancy Drew, as portrayed in the 1930 dust jacket, hurrying through the woods with a clock under her arm.  Also shown is Charlie Chaplin as a victim of time and motion studies from the film Modern Times. Other components include the phases of the moon, a speeding roadster, and a reference to a classical notion of changing time. Also, a note hastily written in shorthand asks for your "help."

The Secret of the Wooden Lady

My "Nancy Drew Series" takes as its primary reference the fictional woman detective, Nancy Drew, the subject of an extremely popular series of books in American  culture.  The character Nancy Drew represents the independence and problem-solving intelligence of the detective figure, while also alluding to the independence, creativity and determination of the artist.

This screenprint explores the seafaring world.  Intended in 18th and 19th century America as a visual identification of a merchant vessel's economic cargo, the figurehead in this print celebrates the skill of draftsmanship necessary to create a seaworthy vessel, draw an image or letterform, or pen a literary work of art.  She holds a pen and scroll, a woman of letters gracing the prow of a ship.  And on the scroll is a corner of a marconi-rigged sail, the "clew"—the aft-most corner of a sail.  Buster Keaton,  the "great stone face," launched his career with a brilliant comic bit on launching ships.  Here, he pauses atop the as-yet-unbuilt boat to view the "wooden lady."

The Secret at Shadow Ranch

This screenprint explores the world of the moving image—here specifically the circular movements of a zoetrope which is the forerunner of moving pictures.  There are two events taking place:  the creating of separate images that when shown in rapid succession the viewer perceives, through persistence of vision, as a continuous movement within the image;  and the setting of lights for photographing such images.  The second event involves a revolving zoetrope displaying Eadweard Muybridge's famous answer to Leland Stanford's question about motion—all four legs of a galloping horse are indeed off the ground at the same time.

The Message in the Hollow Oak

This screenprint reveals a mystery played out on a favorite American pastime, the game board.  The cards in the deck represent chapters from this particular Nancy Drew book, and images from the text appear at intervals along the "yellow brick road."  The viewer enters into the work with the commonplace American popular culture locator, "You Are Here"—familiar at malls, zoos, museums and the like.  The viewer playing this game then passes through the portal to the egress—a reference to P.T. Barnum's American Museum.  Sam Spade, the detective in The Maltese Falcon, is located near important digging of clues.

The Sign of the Twisted Candles deploys various visual and verbal puns and allusions to western artmaking, to suggest connections among theories of the two-dimensional picture plane, three-dimensional perspective and the later time arts.  The whole scene is illuminated by the large candle.

What this taper's light also shows is a disgruntled fellow "throwing the book" at western art, unable to accept the depiction of visual reality.  Nancy Drew appears both as shadowy artist painting the light and as an active sleuth in the scene.

This screenprint alludes to how the "practical arrangement of space" that architects, house builders and carpenters seek, is like the artist's task.  The elements in this composition include the tools of construction in a practical workshop, including a drawknife, with Nancy Drew silhouettes surveying and measuring the scene.

The Secret of Red Gate Farm

This screenprint is an homage to Edward Hopper and his remarkable paintings Gas and Four Lane Road.  In The Secret of Red Gate Farm, as in Gas, it is twilight, the time of day when your eyes play tricks and a Mobilgas Pegasus might leap into the approaching night sky.  This gas station bears the sign "last chance for ...."

Varieties of the color red suffuse the composition–neon red, brick red, enameled red and wooden gate red-brown as a further allusion to Hopper's compositions and to the title of the Nancy Drew Mystery.

The Mystery at Lilac Inn

This screenprint is the next to "last" in my "Nancy Drew Series," and shows the artist and detective in a rain soaked house, with her invaluable magnifying glass in her pocket tracking, with wet footprints, some possible villains.  Their raingear and boots are seen on the far wall, while Nancy sleuths the situation.  On the lilac painted wall behind her, a shoehorn artwork alludes to Magritte's "This is not a pipe."

The Mystery at the Moss-Covered Mansion

This screenprint is about the art of painting, the many decisions that go into creating an artwork and choosing the subject matter. The subject matter of the easel painting is a peaceable kingdom, similar to many painted by Edward Hicks in the nineteenth century. As a Quaker he believed in peaceful coexistence of all creatures. But Woody Allen reminds us that while the lion will lay down with the lamb, “the lamb won’t get much sleep.” The table with claw feet suggests another animal in the kingdom. The paints on the palette are the primary colors, and the paint brushes are set in the can with bristles upward. This is a reference to the artist Jasper Johns who created a sculpture of a Savarin coffee can of his own painting brushes turned downward. The Spam can depicted here refers to the can often found in Hawaii.

The Clue in the Old Album

This screenprint takes place in a cozy American carpenter gothic attic. It is a reflection on those who live stationary lives and those who are transient. When looking through the window the viewer places him or her self in the “American Gothic” painting by Grant Wood, and views the (heretofore unrevealed) scene that the American gothics were looking at.

The Ghost of Blackwood Hall

This screenprint honors the sleight of hand employed by magicians, comedians, artists and other illusionists.  One reference is to W.C. Fields and his wooden nemesis, Charlie McCarthy, both attired in top hats.   Another reference is to the the "wild card" top-hatted Mad Hatter.  Also, Nancy Drew book illustrations are handed to the viewer, as is an American Sign Language message, and the entire allusive scene is drawn from a magician's hat.

The subject of this screenprint is about finding one's way-the big compass as a
guide. A Nancy Drew silhouette joins a jester and Charlie Chaplin "out on a lark,"
"kicking up their heels." The biplane's vapor trail sends the Morse code message
SOS alerting the viewer to the fallen Icarus, who also "kicked up his heels" but
did not heed his father's warning and so plummeted to his death below (from a
painting by Breughel). The computer password code in asterisks is "lark" and the
star shapes are types of horseback riding spurs.

The Quest of the Missing Map

The Secret of the Golden Pavilion

The Mystery of the Ivory Charm

The Clue of the Broken Locket

The subject is about typography and all types of letters and letterforms.

The Clue in the Crumbling Wall

The world in this print is both inviting and puzzling, a kind of shell game requiring Nancy Drew to draw on all her resources.  The dominant blue-textured ground or surface comes from the blue cloth covers of the early books in the series.  The blue texture is sometimes ground and sometimes surface.  One larger intent in this print is to investigate pictorial relationships between inside and outside, foreground and background and surface and depth.  Nancy knows you can't tell a book by its cover just as the surface appearance of a room or the apparent layout of a crime scene does not reveal the hidden and deeper meanings.

In this print Nancy discovers a trunk filled with shells, attempts to open a tower door,  and tries to probe the surface of a river.  What she finds inside the trunk, outside the door or beneath the water's surface may be liberating and significant; or may merely reveal puzzling clues and deeper mysteries.

In the course of her determined investigations she sometimes temporarily comes up against a wall where she must rise to the new challenge (climb a chair) and draw her own conclusions.

The central composition of this print suggests a multi-planed room, a mysterious interior with ghostly chairs.  One item of decoration in this room is from the world of films, an ornately-framed still image from the classic Hitchcock mystery, The Lady Vanishes.  In this image, May Whitty is explaining a musical code crucial for solving a mystery.

The Clue in the Jewel Box

The Mystery of the Fire Dragon

The Clue in the Diary 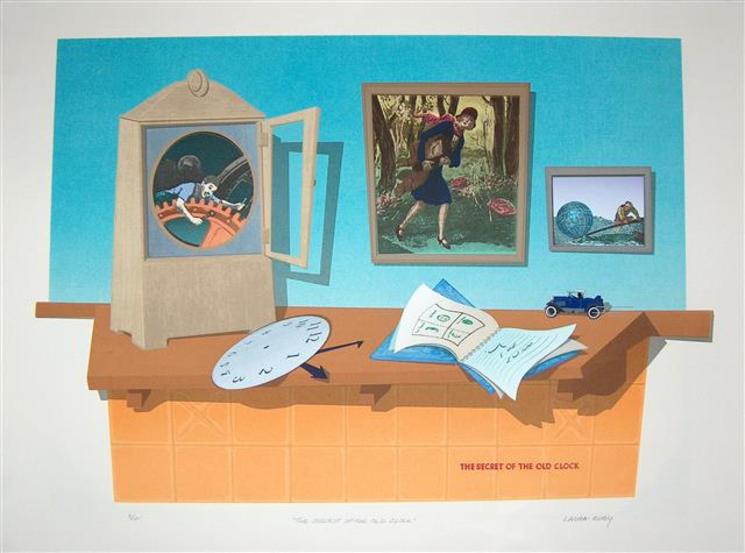 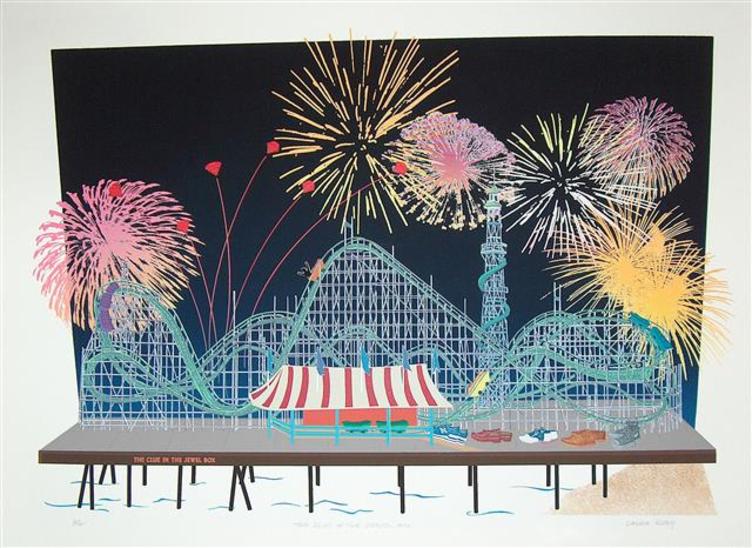 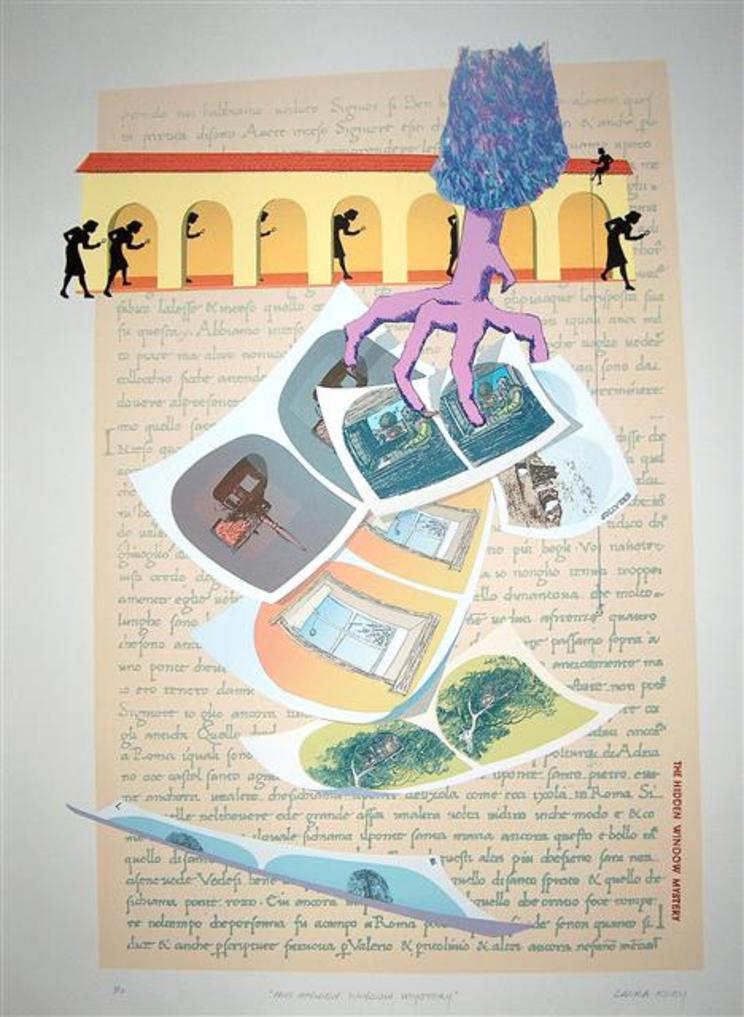 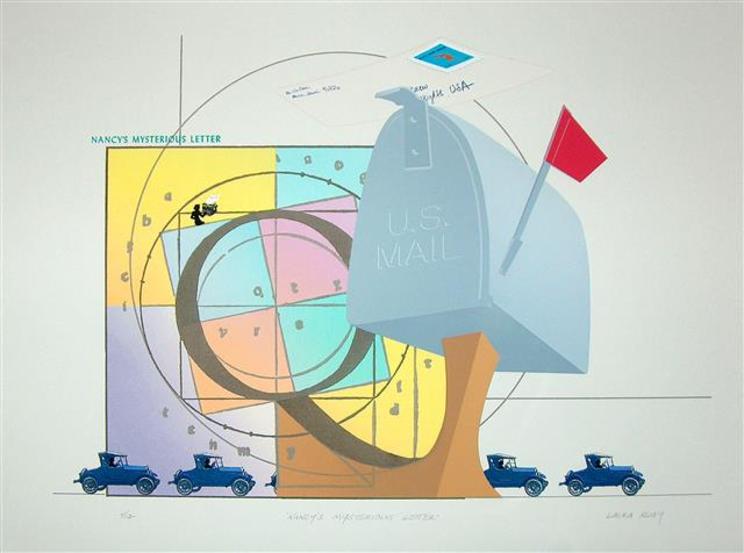 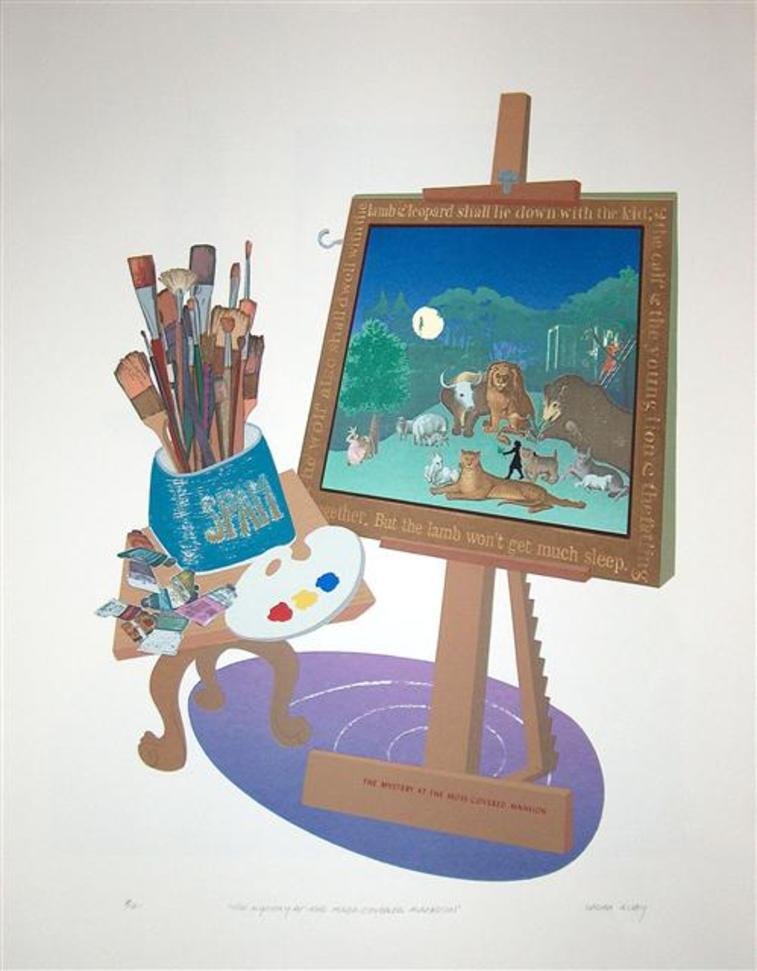 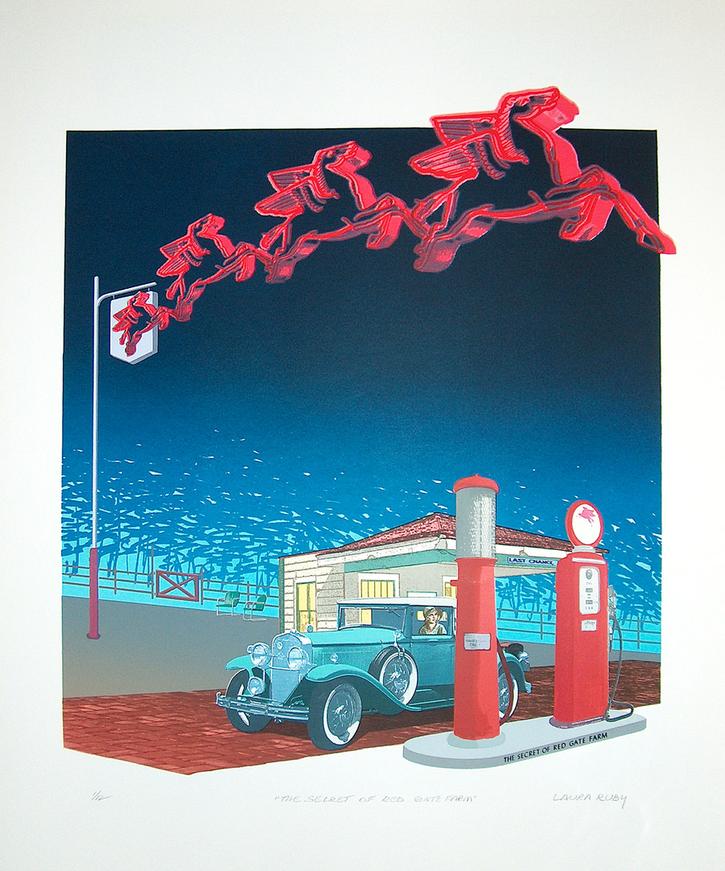 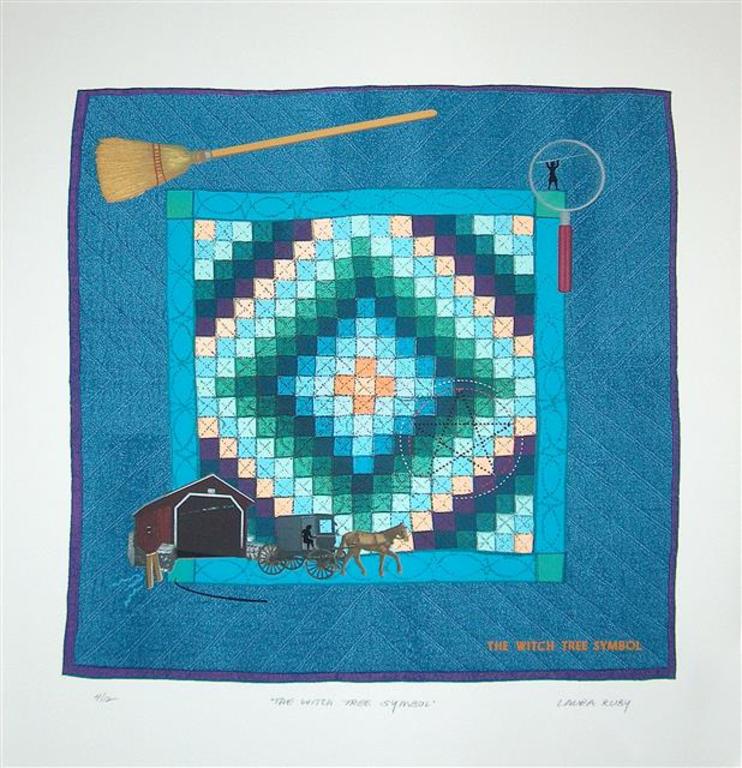 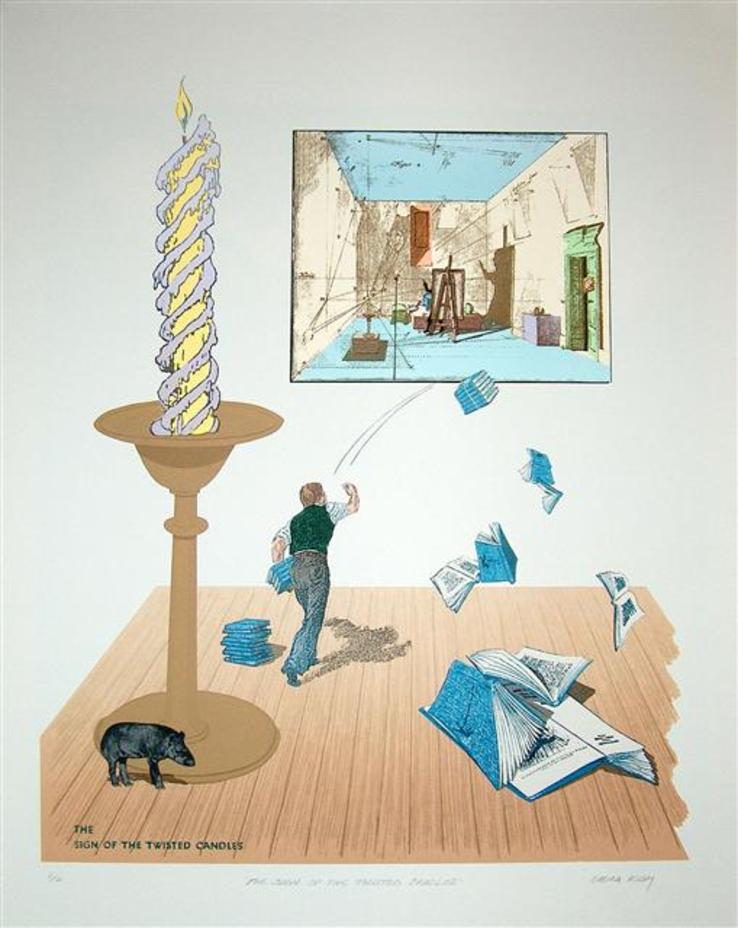 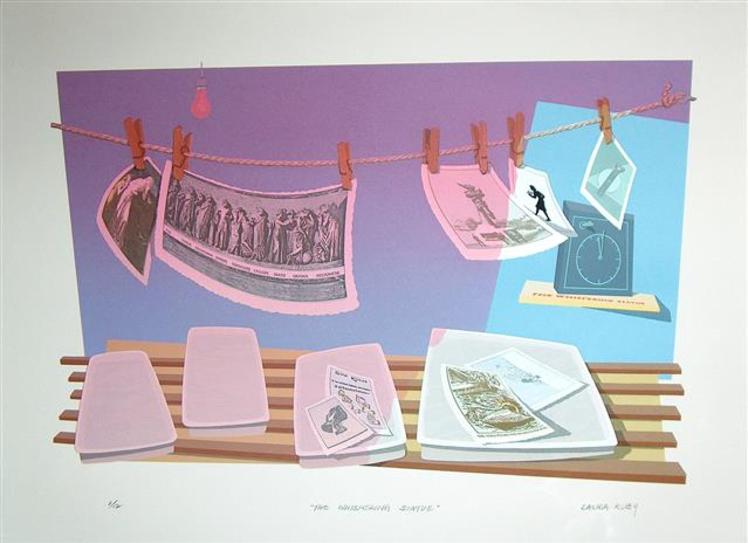 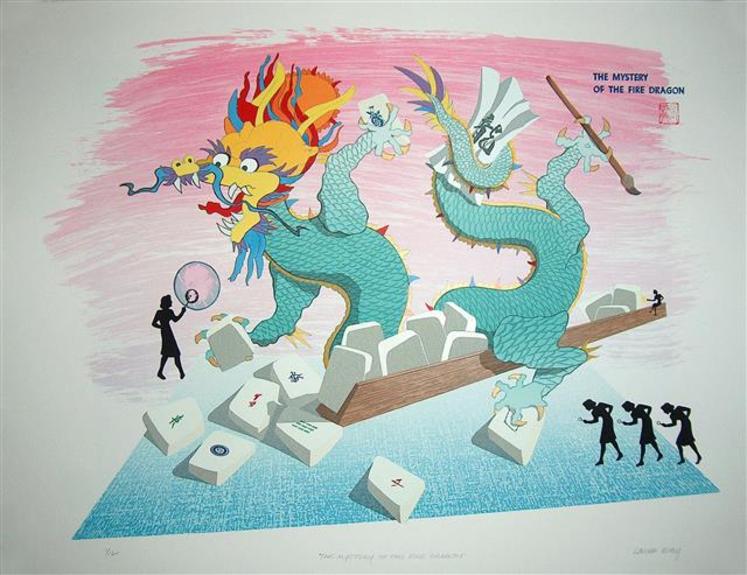 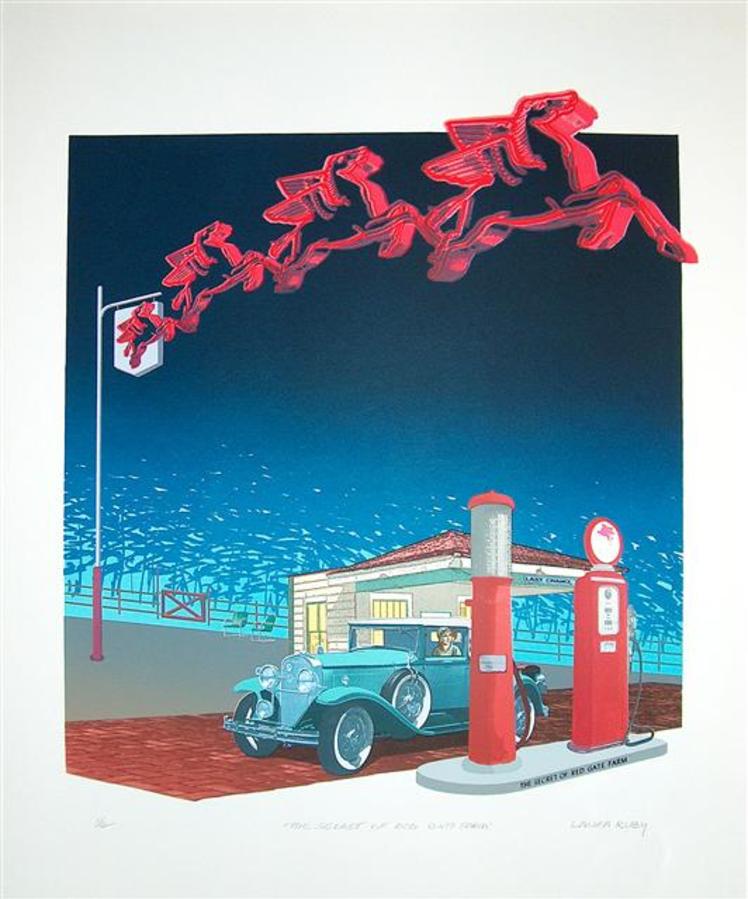 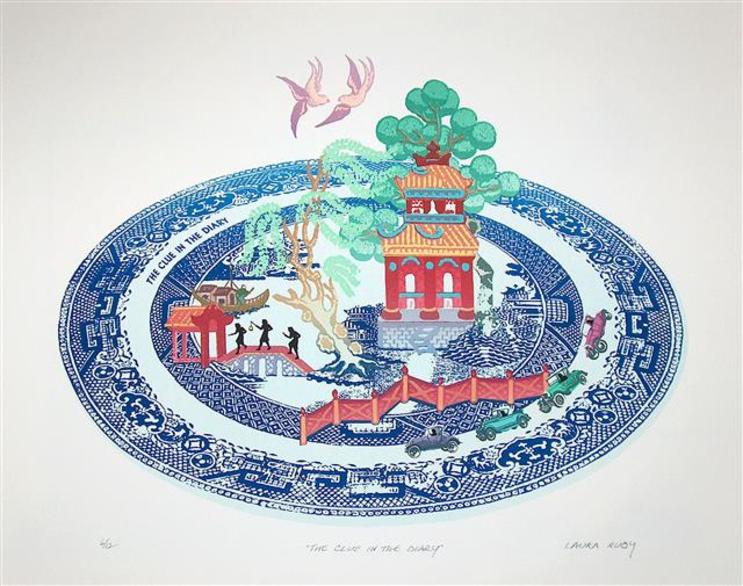 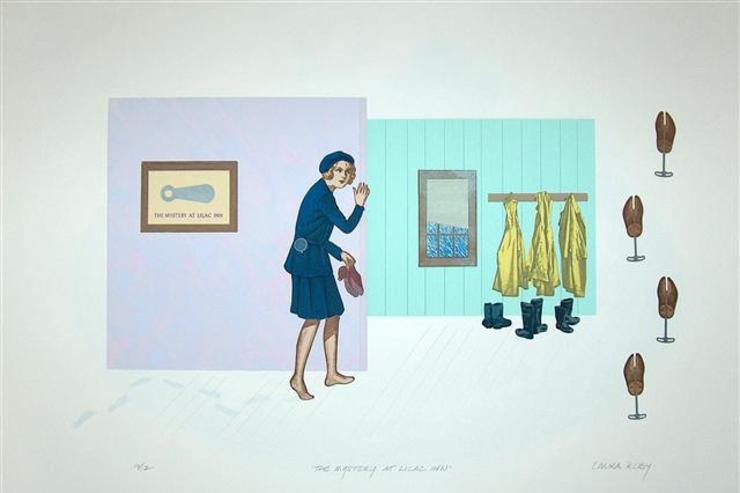 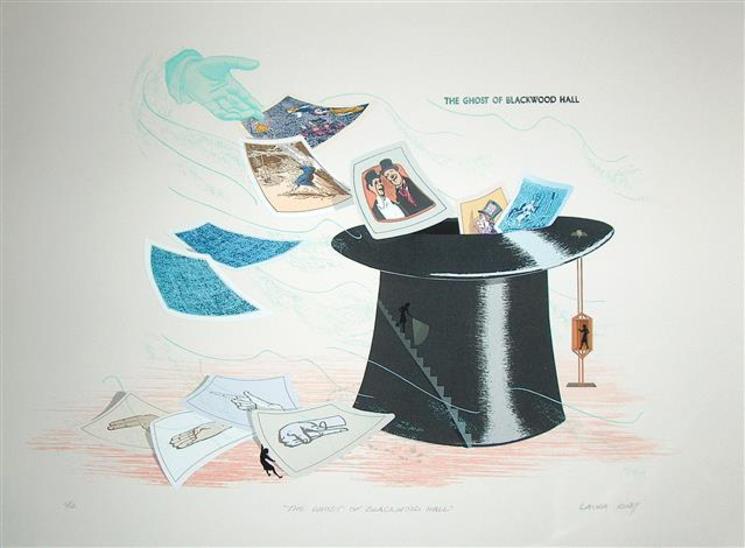 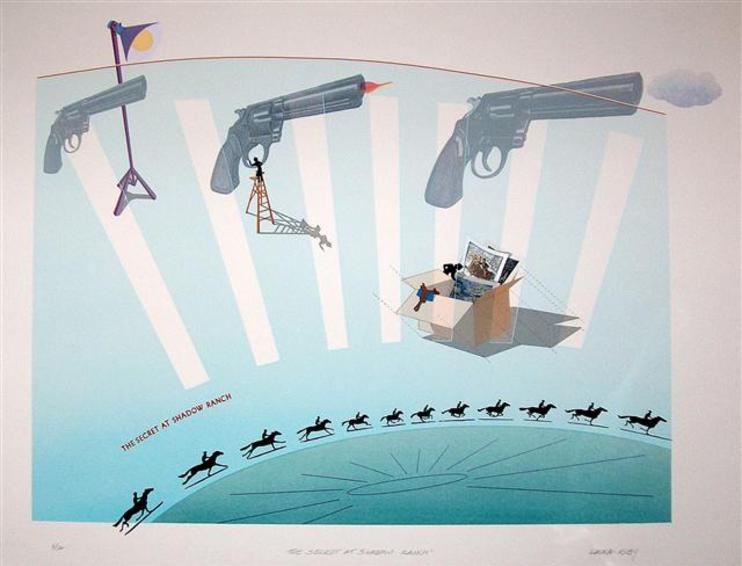 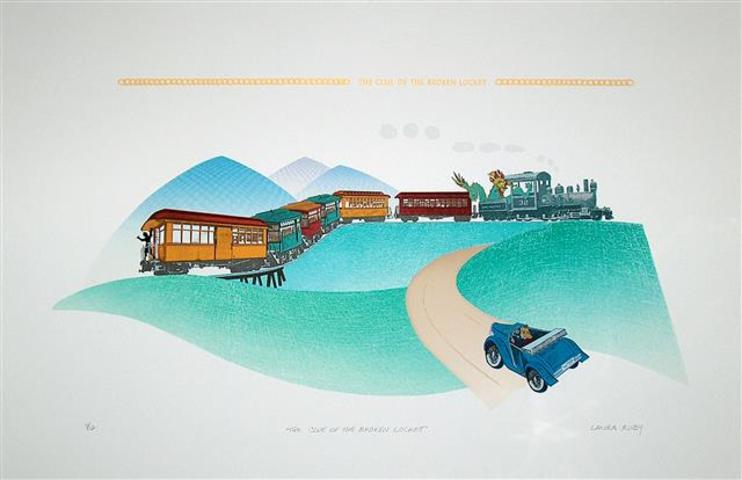 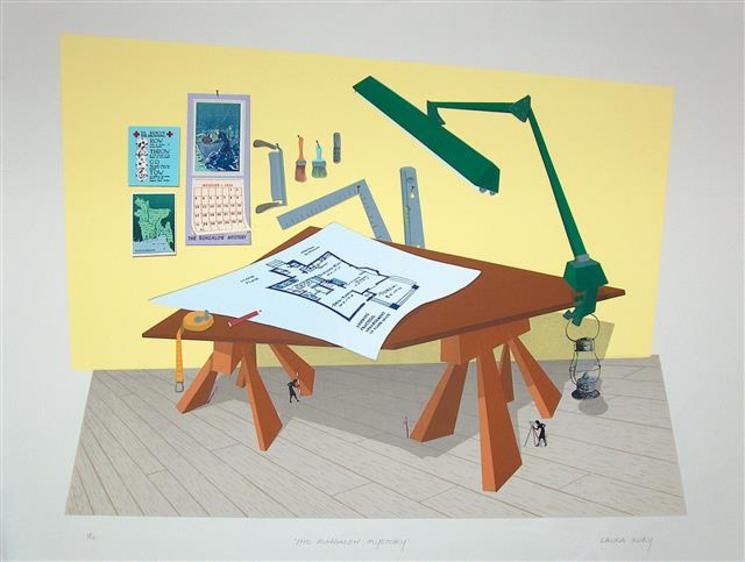 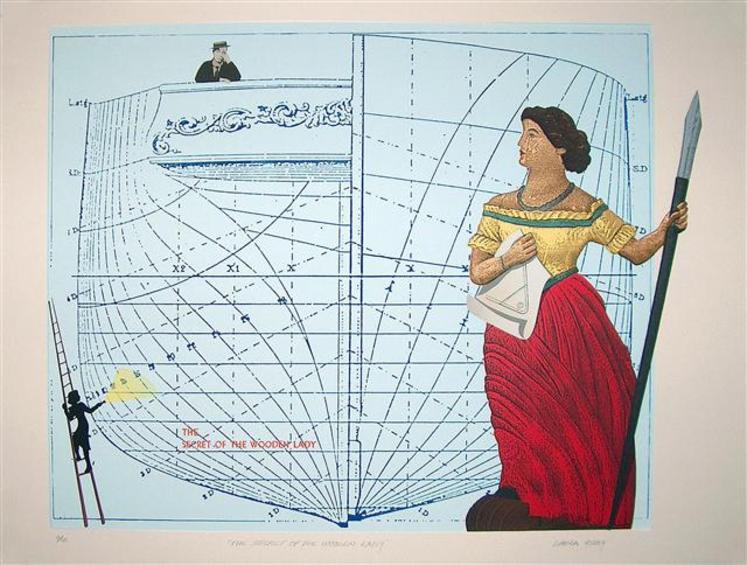 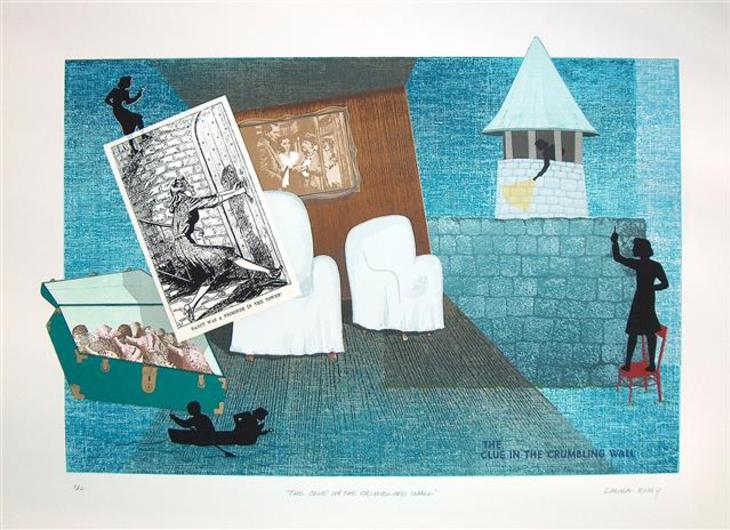 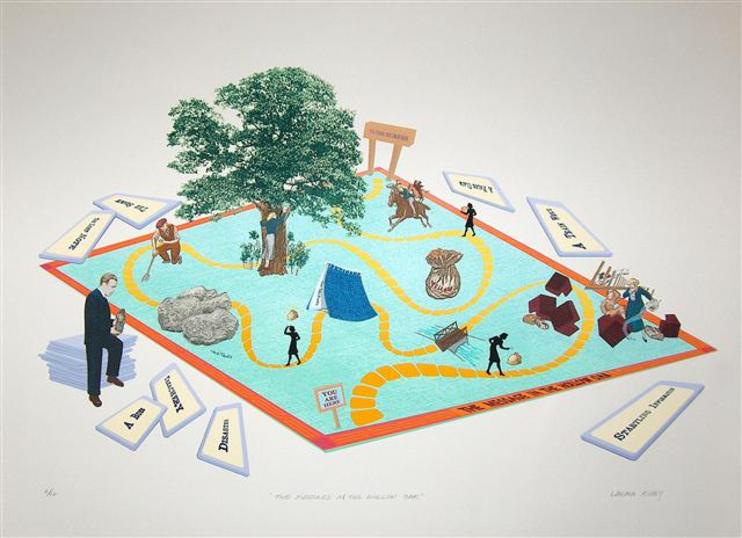 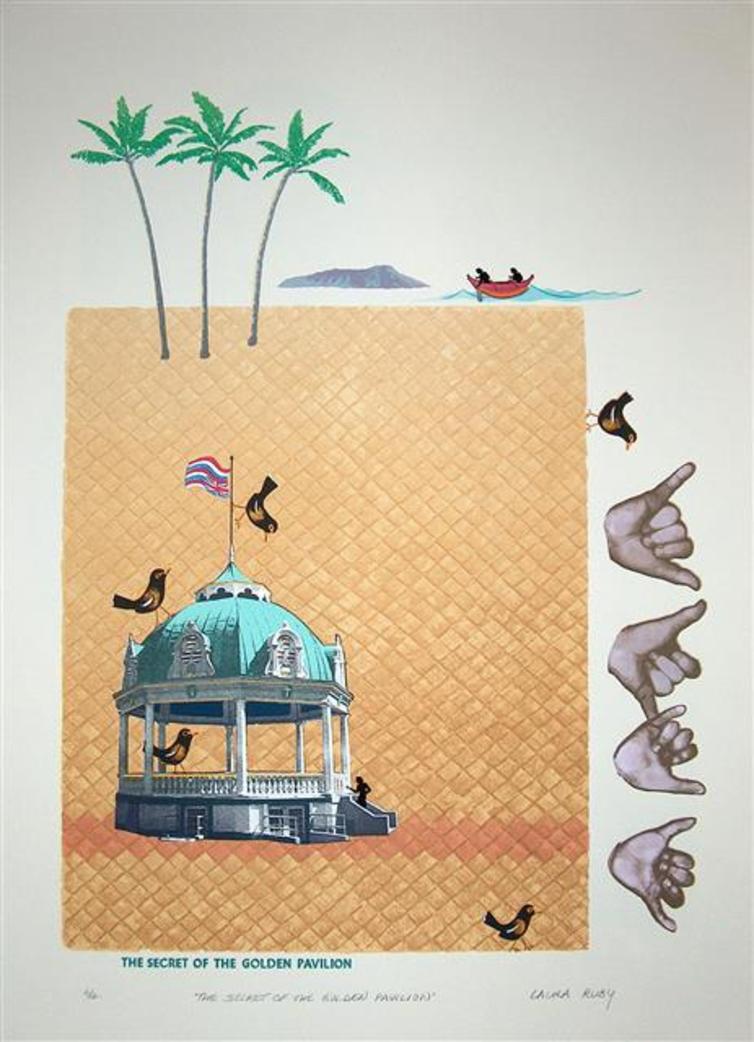 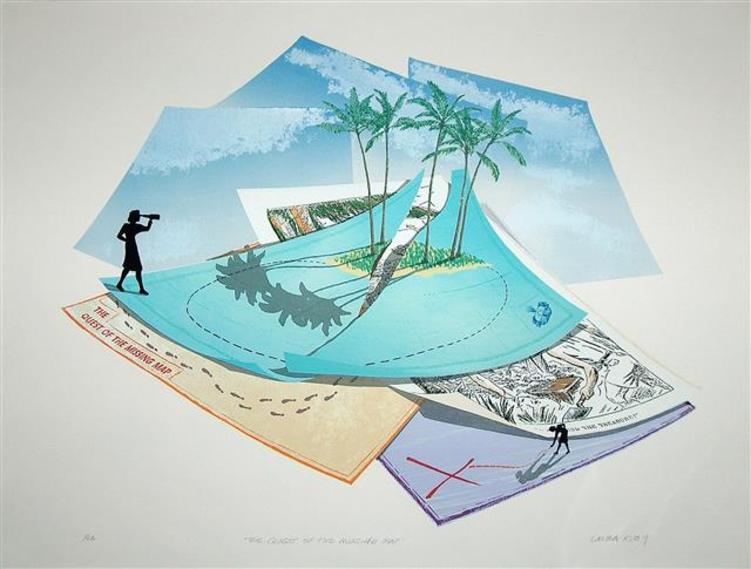 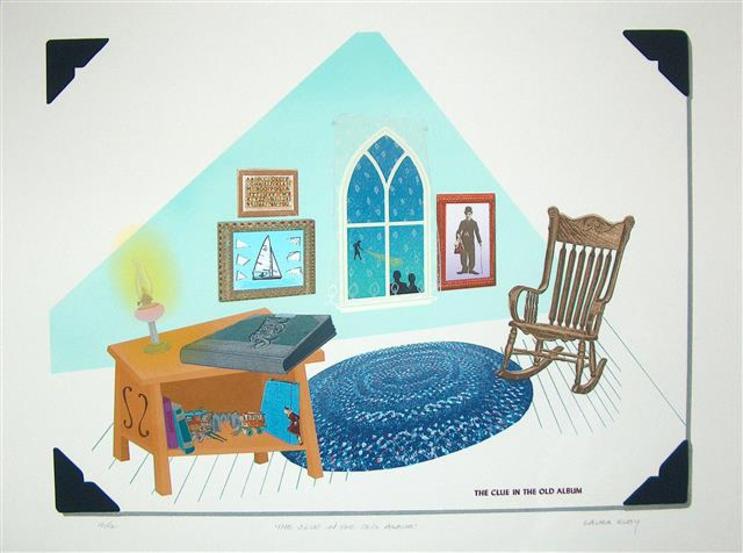