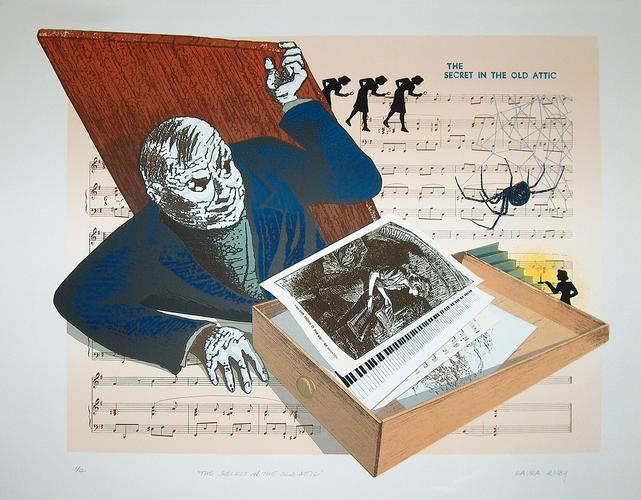 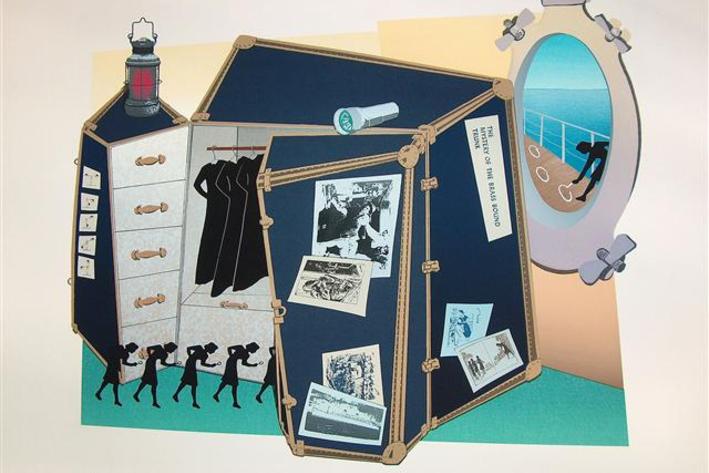 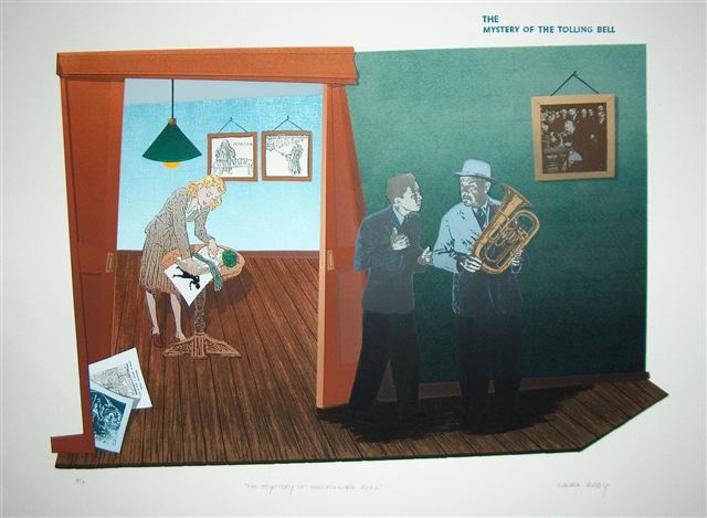 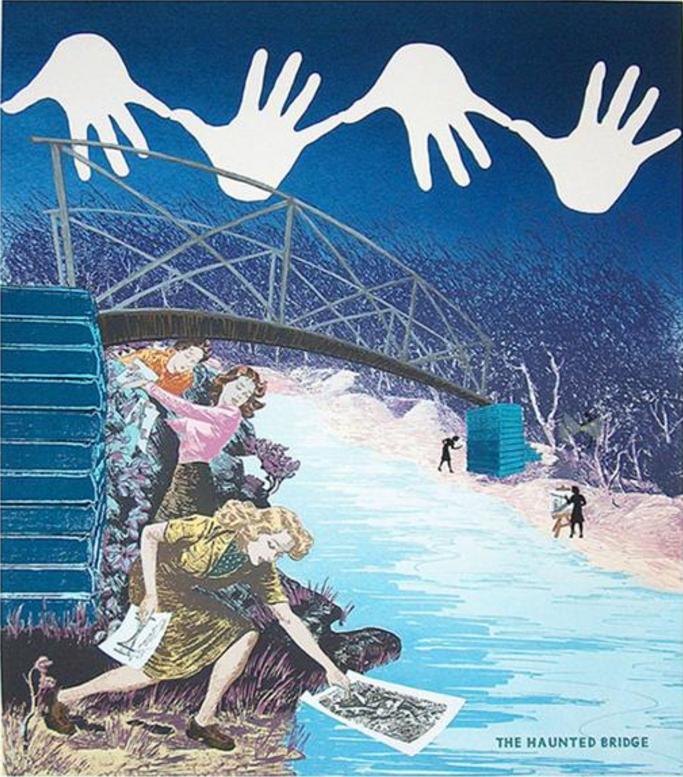 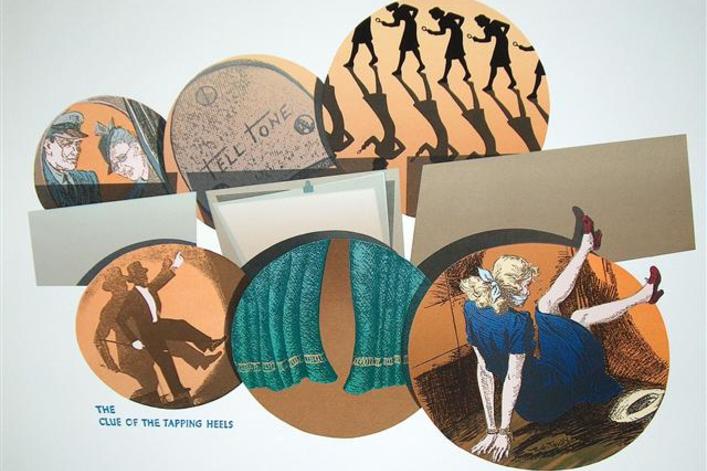 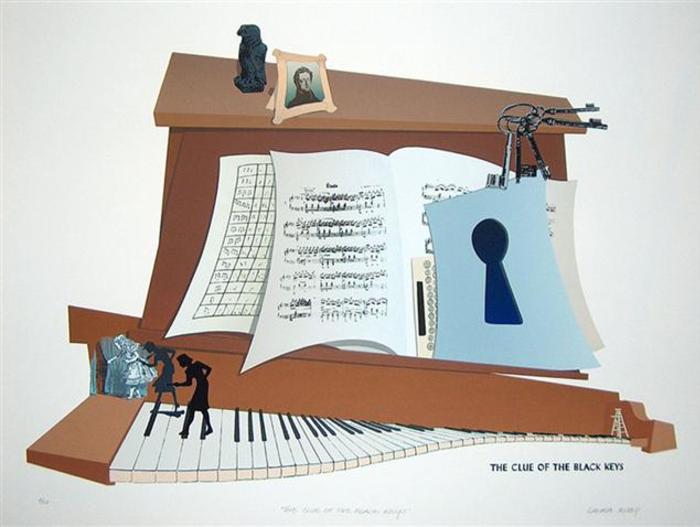 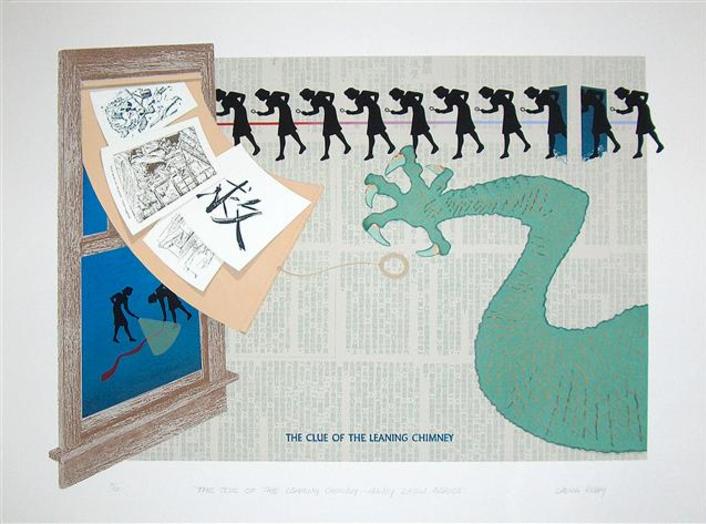 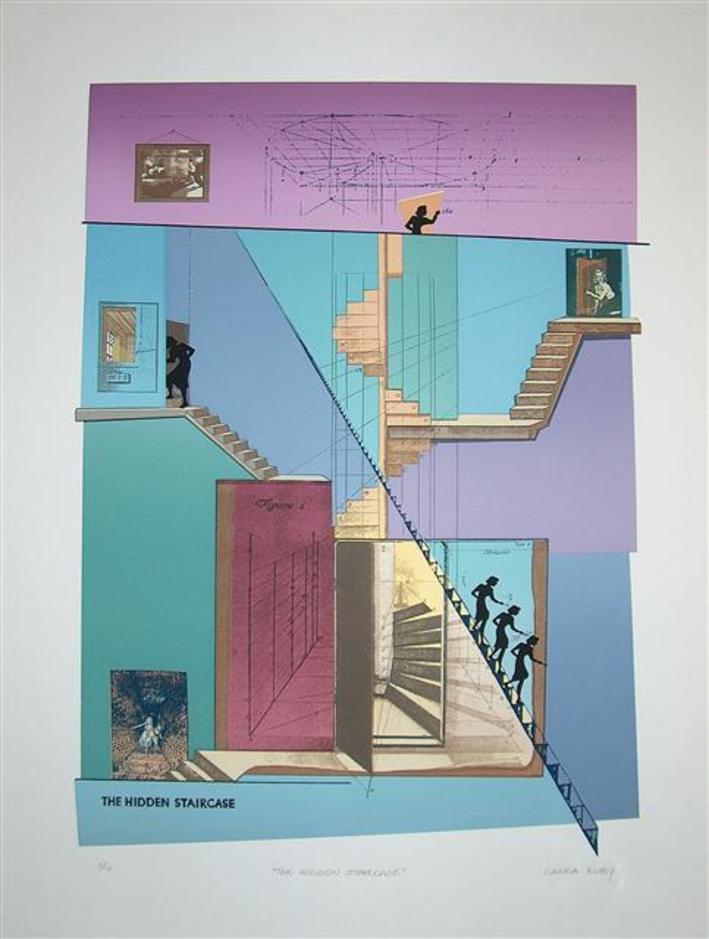 ​​​​​​​​​​​​​​​​​​​​​​​​​My “Nancy Drew Series” takes as its primary reference the fictional detective, Nancy Drew, the subject of an extremely popular series of books in American  culture. The character Nancy Drew represents the independence and problem-solving intelligence of the detective figure, while also alluding to the independence, creativity and determination of the artist. The first obvious punning relationship is in the name, Drew, but the series employs both playful and serious multiple visual and verbal interactions in its concept and design.

The multiple levels of visual/verbal interplay incorporate references to the tools and processes of art making, including allusions to numerous codes and sign systems. For example, the print, The Clue of the Black Keys, contains historical and contemporary musical notational systems (including Chopin’s Black Key Étude) and a typewriter schema; while The Clue of the Tapping Heels contains Morse code and The Secret of the Brass  Bound Trunk includes semaphore. Each individual print and installation sculpture, of course, includes far more imagery and conceptual material in addition to these notational systems, and as a series the artworks have much interplay and interaction of concept and imagery. Other subject matter includes such popular culture elements as comedy films, mystery films, popular music and others.

My “Nancy Drew Series” encourages viewer involvement in the search for clues and understanding. One major theme of the series is the acknowledging of the artist/detective as maker and the viewer as an involved participant in the detection.

The Mystery of the Brass Bound Trunk

This series of screenprints refers to the Nancy Drew Mysteries—a series of books depicting the adventures of a young woman detective.

This print engages the viewer in a mystery aboard an ocean liner.  The print plays off the title and the subject matter within the Nancy Drew book.  The large trunk drawn in an intentionally distorted style, is wedged in a cabin while a Nancy Drew silhouette, a two-dimensional flat depiction, is busy outside the porthole chalking wet footprints in the illusory space of linear perspective where the size of objects gets smaller and recedes, indicating distance.  The two-dimensional silhouette in repetition, indicating dedicated pursuit of clues, investigates inside the cabin and inside the trunk.  Notice the changes of clothes:  these suggest the future on-board detective work to come.

On top of the trunk are two different light sources, a kerosene lantern and a battery operated flashlight.  They are necessary to navigation: red marks the port or left side of a ship and green marks the starboard or right side.  Of course their effectiveness is limited as they are located within the cabin rather than visible to navigating vessels.

The semaphore flags affixed to the trunk signal attention and help!  Those viewers able to read the code might wonder at the urgency of the situation and who is appealing to them.

Other travel stickers on the trunk refer the viewers to the end papers and frontispieces in several editions of the Nancy Drew books.  Also, the ocean liner is one of a number of Lurlines that plied the waters for many decades between Hawaii and the West Coast.

There is also an allusion to the famous Marx Brothers shipboard scene in Night at the Opera, in which Groucho asks, rather than put the trunk in the stateroom, “Wouldn’t it be simpler if you put the stateroom in the trunk?

The Clue of the Leaning Chimney

This print is a cross-cultural puzzle. This artwork is set in an upper floor of an American balloon-frame house.  However, the wallpaper comes from Chinese newspaper articles about ancient Chinese artworks, Chinese New Year’s celebrations and the poet Li Po.

The large Chinese dragon’s claw draws the window shade revealing the dragon’s own origins painted on the ceramic vase within the oldest frontispiece.

In addition to this early frontispiece by R.H. Tandy, the extended shade reveals another frontispiece and an endpaper illustration from the 50’s and 60’s.  This is Nancy Drew’s visual history and the Chinese character for help! commands the viewer to make haste, to take action.

This print plays on the words in the title, and muses on the viewers or readers bridging the gap between the events of lived experience and the imaginary world of created fiction.  The bridge though modeled on a wooden bridge style common in the early part of the twentieth century, is in fact a suspension bridge.  That is, a viewer or reader enters into an artwork or film or literary work in a suspension of disbelief.  The Nancy Drew books are the piers of the bridge—all access to the visual imagery is conveyed by them.  The span of the bridge is measured by hand spans.

Two two-dimensional Nancy Drew silhouettes are pursuing evidence; one, near the far pier of the bridge, investigates her very source and the other in the woods shines light on possible gnarly clues.  The third silhouette is drawing—not the bridge that she sees, but a drawbridge.

On the left side of the print Nancy and her friends, Bess and George, cling to the cramped footings under the bridge retrieving their own cast off frontispiece and drawings of three notable bridges in Hawaii.

The Clue of the Black Keys

The key elements in this print refer to a variety of methods of puzzle-solving, wherein keys and locks can open doors and shed light or can lead investigators into deeper complexities.

Another central component of this print is the importance of language systems, including music notation systems and touch-typing systems, in conveying information and meaning. The brilliant composer Frederic Chopin once set himself the puzzling challenge of creating a study employing only the black keys of the piano, and part of the score of the resulting étude is at the keyboard of this print. Chopin's portrait sits atop an upright piano, along side a black bird, the highly prized "Maltese Falcon" from the classic detective film based on Dashiell Hammett's novel.

The resolute investigator, Nancy Drew, seen here in two silhouettes from different eras of the Nancy Drew books, pursues Alice who is drawing aside a curtain into a world that gets "curiouser and curiouser."

At the far right of the keyboard ascending above the highest note is a stepladder, itself a scaled implement used for ascending and descending. As in all her cases, Nancy's investigations rise and fall according to her own resources and ingenuity until she draws her own conclusions.

This series of screenprints refers to the Nancy Drew Mysteries—a series of books depicting the adventures of a young woman detective.

This print is about art-making and the nature of illusory space, as well as the nature of detection, clue-seeking and puzzle-solving.  Staircases are notoriously difficult to depict in two-dimensional space, and Western artists and architects through the centuries have contrived systems to render the hidden dimensions of depth.

In my print various perspectival illusions, derived from Renaissance drawing guides, as well as contemporary art notation systems, provide a complex two-dimensional, and an implied three-dimensional world for Nancy Drew and her investigations.

In her investigations, Nancy also confronts popular culture and so-called high culture; for example, at the top of the strong diagonal staircase is a reference to Laurel and Hardy's exasperations delivering a piano up a long staircase in the famous short, The Music Box, while near the bottom of that diagonal Nancy silhouettes descend a staircase evoking Duchamp's Nude Descending a Staircase.


Some additional comments on this print:

The colors of the print are those of Mise Unseen (one of my installation sculptures)—though with white or light gray added.

As I mentioned in the The Hidden Staircase statement—staircases, especially spiral ones are notoriously difficult to draw—in another print, Station Easy—Diamond Head from my “Diamond Head Series, in which I draw a spiral staircase which is revealed only through touch and the beam of a dim flashlight. The staircase is located inside a military bunker within the rim of the volcanic crater. One climbs it cautiously in the dark.

Sometimes you sense you are moving into depth within the print, and at other times that you are looking at flat slightly varied surfaces of an architectural structure.

A silhouette enters the attic through a trap door and another  shines her light in a ‘’room” that appears to have a window to the “outside: both these parts of the image also refer to elements within Mise Unseen. (1604 is a date on one of the perspectival drawings used in the print.)

In The Music Box, Laurel and Hardy have made their way up a long flight of stairs many times only to slide/tumble back down‑‑in mythological terms, Sisyphus and his rock. The film image in the print is “hung” on the flat surface of the print, but is also located in the three‑dimentional illusion of the attic. The image is frozen as they complete their last three steps—up and into a pond. Hardy standing in the water, is exasperated as usual and Laurel is quizzical.

The Mystery of the Tolling Bell

This artwork puns extensively on its title.  It is a conundrum involving tolling, or alluring or enticing, visual and aural clues.  It engages the viewer.  The print “rings a bell” as the frontispiece stuck in the drawing room door suggests, “‘This is what I hoped to find!’ exclaimed Nancy.”

The bell shade of the lamp sheds light on the detective’s discovery.  This form is visually echoed in the euphonium bell and the speaking tube of Alexander Graham Bell’s first telephone.  The images on the wallpaper in the outer room are bell curves and the hanging artworks in the inner room are of Pythagoras’ bell tone system.  The bell pepper on the table also plays on the title, and refers to some famous photographs by Edward Weston, and also to a sculpture of mine entitled, Bell Peppers.

Charlie Chan and his Number-One Son, based in Honolulu in many books and films, solved countless mysteries.  This particular Charlie Chan actor was Sidney Toler, referring again to the tolling title, while Number-One Son gestures   with incredulity at Nancy’s investigative powers.

The Clue of the Tapping Heels

This print in my "Nancy Drew Series" employs images and references from popular culture, communication codes, as well as an early frontispiece from this Nancy Drew story.  While Nancy taps our her cry for help a visual echo is provided by the dominant graphic of Morse Code's   ...  ---  ...   .   Other elements include the famous taper, Bill "Bojangles" Robinson, metal "Tell Tone" taps, a drawn curtain and footlit shadows all designed to create a theatrical scene fraught with peril and mystery.

The Secret in the Old Attic