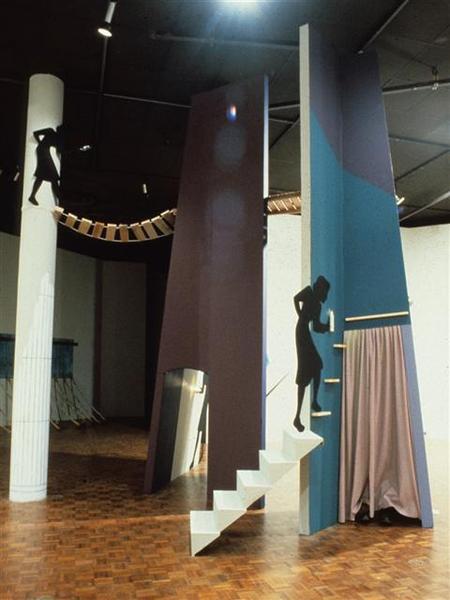 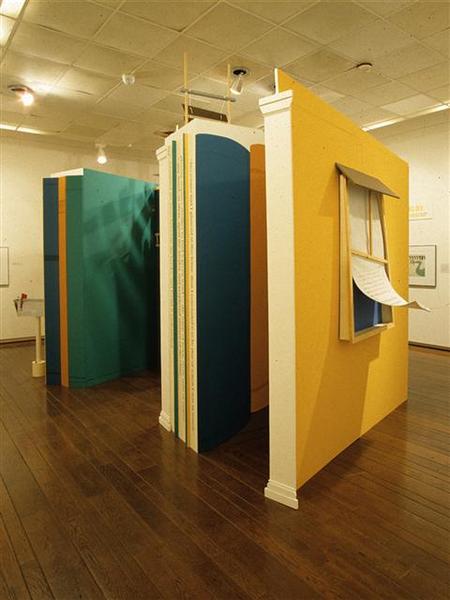 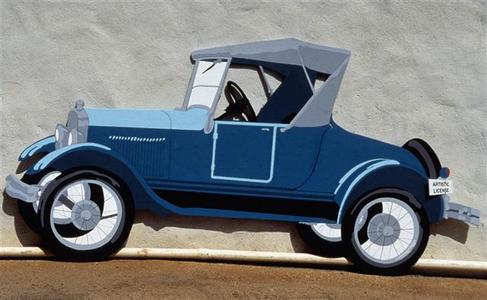 The Mystery of the Open Book

The Mystery of the Open Book, like my earlier installation, Mise Unseen, is concerned with the art of detection and the art of art-making, and the sense of discovery and clue-gathering common to all forms of investigating. The Mystery of the Open Book is a village of books. That is, the component parts are both larger-than-human-scale books to be walked through and into, and a village of literary edifices including the architectural components of stairs, ladders, closet, suspension bridge, trap door, Roman arch, false columns and doors all come upon in chance/random order. There is no fixed way to interact with the sculpture, though it invites walking perusal. Beside the kinesthetic act of walking around and through this installation and viewing it from many positions, it also engages the viewer/participant in a tactile way. The viewer's eyes note the height from floor level to the 14-foot ceiling. The viewer engages in the physical space by pulling the closet drape back, walking into the open endpapers, opening the mailbox and lifting the window shade. These "clues" can be put together in any order, and the viewer/detective searches the territory in a varied and random way, coming upon "overlooked clues."

The "Book" honors both the Honolulu Academy of Arts (the major museum in Hawaii) and my "Nancy Drew Series" of prints. The visual clues echo clues in the prints. The artwork plays off the conjunction of visual and verbal language systems, and fragments of significant detective stories and their creators—Edgar Allan Poe and M. Dupin, Arthur Conan Doyle and Sherlock Holmes, Agatha Cristie and Miss Marple, and Dashiell Hammett and Sam Spade.

The installation further plays off the nature of the museum in so far as in most museums the visitor is conveyed through the building and grounds in a somewhat fixed pattern. You often proceed by chronology or by taxonomy (by categories of phylum/type of plant, animal, etc. in a natural history museum or by categories of art historical groupings [such as Asian art—art of India, China, Japan etc.] in an art museum. I asked the museum director if I could symbolically "break the walls" of the museum and not only imply that my artwork broke through the ceiling and the floor, but also that there be "clues" placed throughout the museum, and the museum agreed to clues being placed in the western area of the museum.

A map "guides" the viewer in a search for these outlying clues. There is no fixed order and in fact the search itself, the pursuit itself, of the clues, may be considered the satisfaction a viewer receives rather than the sense of a solved mystery. The clues throughout the museum do, however, comment on the main body of the "Nancy Drew Series" exhibition and on the nature of artmaking found throughout the museum.

I hope this discussion indicates my concern with the nature of detection and the nature of art-making in the world. The scientist and librarian and journalist and teacher and artist and detective actively engage the world in order to comprehend its meanings. Within the highly entertaining popular literary context of the Nancy Drew books, serious questions of meaning in art and meaning in the world can be addressed, even playfully. The Nancy Drew books provide an enormous wealth of visual and verbal material; and as an artist, I find them rich resources for discovery, detection and art-making.

My installation sculpture (a temporary three-dimensional artwork created for a period of time and then dismantled), is entitled Mise Unseen, and it acknowledges and credits the viewer as an involved participant in the detection of an artwork. The sculpture is “about” the acts of creation by an artist and the detective work of the viewer/participant discovering and understanding clues.  Its form is based on theatrical and film sets. Mise en scene refers to the setting for the action of a drama (in this sculpture’s case the act of detection) and all the surroundings, scenery, props necessary to the dramatic action. Mise Unseen is a play on words—the drama is of the viewer’s participation in discovering evidence and clues; the particulars both visual and verbal, which may be come upon by chance/random order, and also by later reflection.

The particular reference of this stage set comes from the artistry of German expressionist black and white films in the early decades of the twentieth century, for example the Cabinet of Dr. Caligari, where the expressive scenic design and props intensified the dramatic action. The use of light and shadow comes from the dark, mysterious mid-century world of the film noir.

This installation was located in the University of Hawai'i Art Gallery and was intended to evoke the art notation systems and verbal play used regularly in the surrounding art building.

The architectural and theatrical components in Mise Unseen of tunnel, stairs, ladders, closet, catwalk, suspension bridge, trap door, false column and doors, real and false shadows and cast light, as well as visual and verbal “finds” are come upon in chance/random order.  There is no fixed way to interact with the sculpture.  Beside the kinesthetic act of walking around and through this installation and viewing it from many positions, it also engages the viewer/participant in a tactile way.  The viewer’s head and eyes range from floor level to 14-foot ceiling height.  The viewer engages in the physical space by stooping and walking through the tunnel, standing within the trap door, pulling the closet drape back and lifting the window shade.

Along the way discoveries are made which suggest there may be others— and there are.  The viewer/detective searches the territory in a varied random order, coming upon “overlooked clues.”  Do the Nancy Drew silhouettes create a narrative direction—larger at ground level to smaller at the ceiling height?  Do her tools for detection help the viewer to explore meaning?  The smallest Nancy silhouette is engaged in writing and drawing—and in two languages—the phrase, “stroke of luck.”  Is the viewer exploring the possibility that the Nancy silhouettes have created this very artwork and now are in the process of questing for meaning in the act of creation?

The visual and verbal clues are there—”brush with danger”—the art-making of painting, “The Cabinet of Dr. Calligraphy” both the notational system of brush and pen work and an allusion to film making; “Jaspers, Jaspers, Where’d You Get Those Raspers”—refers to a popular twentieth century song, “Jeepers Creepers, Where’d You Get Those Peepers”—eyes are for seeing—and a sharper insight as Jasper Johns, American artist, has sharp perception and is grating to the critics; and “draw your own conclusions”—the viewer’s direct participation in the created work.  One major theme of this work is the acknowledging of the artist-detective as maker and the acknowledging and crediting of the viewer as involved participant in the detection. 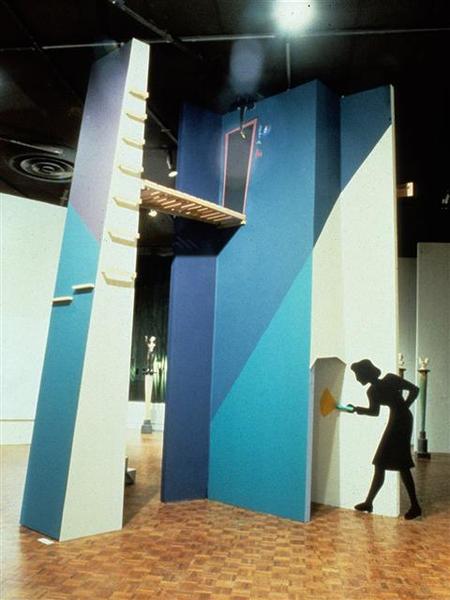 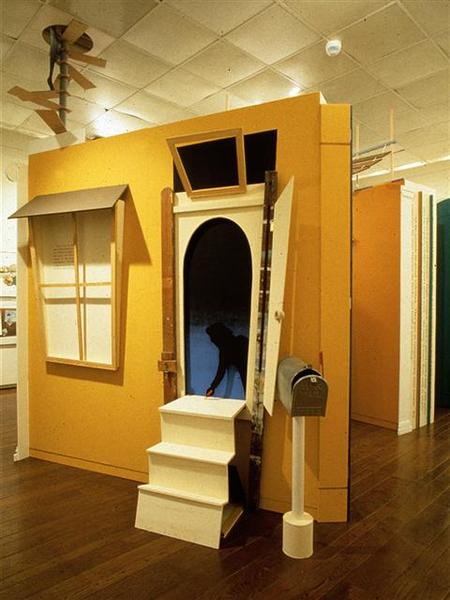